Cayo Films will give interested audiences an inside look into its latest project, The Covenant, during this exclusive livestream event. The webinar titled: “Building the Lost World of Daniel” will be live on Monday, October 25 at 7:00 p.m. EDT. 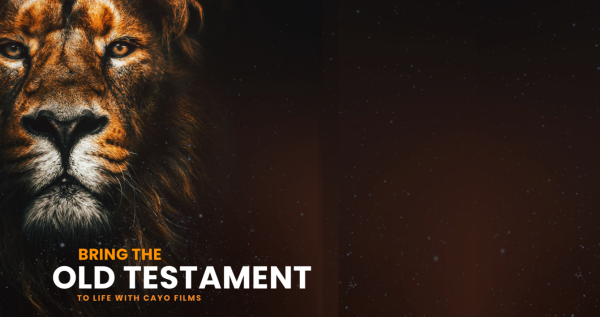 Park City, UT – Cayo Films will give interested audiences an inside look into its latest project, The Covenant, during this exclusive livestream event. The webinar titled: “Building the Lost World of Daniel” will be live on Monday, October 25 at 7:00 p.m. EDT. The ambitious multi-season series depicts the foundational stories of the Hebrew Bible and the Tanakh starting with the story of Daniel.

The live webinar will be hosted by Ron Daw, CEO of Cayo Films and a producer of The Covenant and will feature a structured discussion with Old Testament Professor Dr. John Walton, The Covenant’s director Cyrus Nowrasteh and screenwriter Andrew Klavan. Walton will talk about ancient Babylon, the story of Daniel, and explain why misconceptions arise around prominent bible stories. Nowrasteh (The Young Messiah, The Stoning of Soraya M) and Klavan (Edgar Award Winner, The Daily Wire) will discuss their plan to bring the rich, engaging stories of the Old Testament back into people’s lives.

Dr. John Walton is a biblical scholar working with Cayo Films to ensure the timeless Bible stories are portrayed with honor and integrity in The Covenant.

“I am eager to get involved in any project that will bring the Old Testament in front of people and help them understand it better, help them to appreciate it, and help them to grow as people of faith through it,” says Dr. John Walton. “That’s exciting to me. And I see that in this project.

Livestream attendees can join Nowrasteh and Klavan in conversation about what the two see missing from Hollywood versions of Bible stories and how The Covenant powerfully and authentically bring these stories to life using biblical and historical text.

“I think it’s a great thing to have a project like this approached from people who actually believe. I think that’s a different thought than a lot of filmmakers in Hollywood have had,” says Screenwriter Andrew Klavan.

The Covenant’s creative and executive teams honor the biblical narratives without manipulating their intended meaning. The series will represent stories within their ancient contexts, connecting people of many faith traditions to the memorable and archetypal stories.

“Too often I feel like when we see the ancient world onscreen, it seems like it almost something out of science fiction,” says Director Cyrus Nowrasteh. “I want the audience to feel like they can walk right into the screen and completely understand where they are and how things work, and also be enchanted by it.”

Following the presentation, Cayo Films’ CEO and Founder, Ron Daw, will share how attendees can be a part of The Covenant’s creation through Cayo Films’ crowdfunding campaign. The webinar will close with an intimate and moderated Q&A with Nowrasteh, Klavan, Walton and Daw.

Find out why now is the right time for honest and compelling storytelling featuring saints, sinners, prophets, patriarchs, and timeless lessons found in the Old Testament. Register now at “Building the Lost World of Daniel” to save a spot at this exclusive livestream event.

To find more information on Cayo Films and how to be a part of The Covenant’s legacy, visit https://investincayo.tv/.

Cayo Films is an audience-backed studio dedicated to creating high-budget films that are clean and entertaining. Collaborating with award-winning talent and filmmakers, Cayo Films aims to create content that considers its audience. Cayo Films doesn’t force its viewers to choose between production quality, entertainment value, or personal values. With this goal in mind, The Cayo Films team commits to leaving out unnecessary storytelling tropes and focuses on the beautiful and simple truths of life. Cayo Films turns stories worth telling into films worth watching.

Andrew Klavan (Screenwriter): Andrew is known for his crime and suspense work which garnered him the titles of an international best-selling author and a two-time Edgar Award winner. Along with being an accomplished writer, Andrew hosts the popular “Andrew Klavan Show” on The Daily Wire.

Cyrus Nowrasteh (Director): Cyrus brings the highest expertise as a film director, proven through his work on The Stoning of Soraya M, The Young Messiah, and Infidel. Cyrus is also an accomplished screenwriter, having worked with world-renowned directors Stephen Spielberg and Oliver Stone.