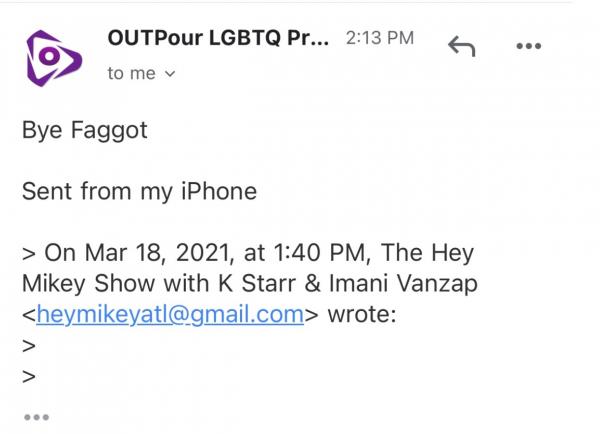 Clark Atlanta University Professor and OutPour LGBTQ Productions’ Executive Producer, Antar Bush, finds himself in hot water after using a homophobic slur against the owner of another LGBT owned production company in an e-mailed legal correspondence.

Antar initially dismissed an e-mail from Maurice D. Ravennah, CEO of Griffin Global Incorporated and President of U DO TV, to cease and desist any production of WebLYFE Atlanta and the use of its name as it has been trademarked and licensed by the series’ creator, Michael Jonvier [Fanning] AKA Hey Mikey ATL, under his media production company, Michael Jonvier Media. He was additionally restricted in using Michael Jonvier’s likeness or image in his past or future work, as Michael Jonvier never authorized this use with the release of a talent release form. OutPour LGBTQ Productions was given until next Thursday, March 25th to comply, or further legal action would be taken. Antar replied to U-DO TV and Michael “LMAO” in one e-mail, and then subsequently followed up with another e-mail saying, “Bye faggot.”

This comes as quite the shocker as not only is this no language to be used in legal or business matters, but OutPour purports to pride itself on being a LGBTQ brand and media company that uplifts and tells the stories of LGBTQ people. “I have to say I was shocked that he would use this type of language at all much less that he would put it in writing. Understandably I’m not his favorite person as the removal of my show from the OutPour YouTube platform would be a sizable reduction in views as it is arguably the largest scale and most visible project the production company has worked on. But for one gay man to use that word against another member of the community in the midst of all the racist, homophobic, transphobic, and xenophobic sentiments our communities are battling is just disheartening, appalling, and disgusting–not to mention completely unprofessional. It does not matter how you try to spin him using the word it is not okay. This latest act by Antar Bush only validates and reinforces my decision to move my show away from his toxicity. ” Michael Jonvier states.

As you may recall, the web reality series, WebLYFE Atlanta, created and owned by Michael Jonvier Medial LLC., had its first season filmed by OutPour LGBTQ and was subsequently moved to U-DO TV for its second upcoming season after the project became embattled with unprofessional acts and production discrepancies . Since the tumultuous end of season 1, OutPour LGBTQ has been notified of the series’ change in production companies several times.

The first was on March 1st. Since then OutPour LGBTQ and Antar Bush have now been notified twice–once by Michael on March 8th 2021 and then most recently by U-DO TV Exec. Maurice D. Ravennah on March 18th 2021 as a final warning to comply with the above mentioned request or face legal action.

It appears OutPour’s leadership is disregarding business ethics and the law in attempting to steal the series from owner Michael Jonvier Media, LLC. by swiftly moving a new season to production under the same name with a different cast. This apparently has the potential to confuse cast members and fans alike as they may mistakenly assume there are two releases of WebLYFE Atlanta Season 2. Only one will be legal, and the other will be met with the full extent of the law.

OutPour LGBTQ Executive Producer, Antar Bush ,is mistaking involvement in production with ownership. This too is surprising as it comes in the wake of various media appearances in which Antar admits to being virtually unknown to Michael Fanning before the series began, admits to the concept being the creation and idea of Micheal Fanning; and admits all casting was also overseen by the owner and creator, Michael Fanning. Somehow now in an attempt to hold on to YouTube followers, views, and analytics he has mentally elevated himself from his questionable role as Executive Producer, Editor, and Videographer; even in the wake of the onslaught of social media commentary on the subpar execution of all three. See Mr. Bush’s admissions in two separate interviews by clicking the links below:

This new narrative of confused ownership is both shocking and confusing. “Copyright and Trademark trolling is a real problem that we advise all of our creatives to be watchful for. There are individuals who will watch your rise and success waiting for opportune moments to prey on you and your intellectual property! In light of how all of this is playing out we are all glad our partner, Michael Jonvier Media LLC. heeded our advice in taking the necessary steps to secure the trademark for the WebLYFE franchise. Hopefully OutPour heeds our warnings and lets this go. The law and overwhelming documentation speak for themselves. You have to be careful who you collaborate with and who you try to help and elevate.” U-DO TV CEO, Maurice D. Ravennah, states.

WebLYFE Atlanta Season 2 begins filming next month under the management of U-DO TV’s Executive Producer, Brand and Project Manager, Ebony Shinelle in a project collaboration with Forever Dope Management Inc. , and sponsorship from Kontrol Magazine. The show is being revived and made over with most of the original cast; Michael Jonvier, Nikia “Freshie” Squire, Carl “K $tarr” Levonzell, Lacie Doll, and Brandon Karson Jordan returning; and a new cast member joining. The second season will premiere in early Fall.