Casale came short only to Kamaz specials, as he pushed to the limits of the crew and his truck, and he added his career-best stage result in Trucks. Meanwhile, Macháček finished in 7th place, and he remains in the same position in the overall standings! 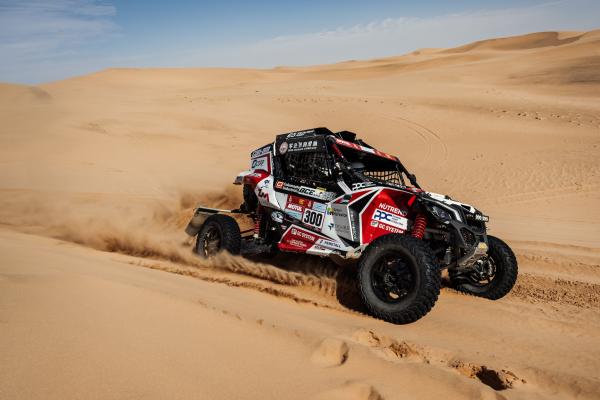 Buggyra has never been better in the history of Dakar!

The main task of the longest 9th stage from Al Dawadimi to Wadi Ad Dawasir (828 km / 394 km) was not to finish in the dark. The opening 200 kilometres had only dunes and sand. But it all changed at the very end of the stage…

Dunes, stones and lots of dust

As Josef Macháček predicted, it was all about handling the dunes, that were drying out throughout the time, and the driveability is going to get more complicated at later stages. “The organisers decided to test us right at the beginning when we faced really challenging dunes. But the end was fast and with rocks. Surprisingly, we didn’t have a puncture this time, and only had a faulty belt,” said the reigning champion about the stage, in which he finished in 7th place. “I’m just a bit annoyed about the hole in the floor because there’s sand coming at me. But it’s manageable. What was worse though, were the huge amount of dust that we faced every time when somebody passed us. Especially if it was a truck…”

In the end, the Dakar veteran came with an interesting theory, confirming his very good mood. “The Can-Am is doing well, Pavel is working well, I’m the only weak link here. Tomorrow, we’re going to be fast again, and we’ll be getting even faster,” he added laughing.

By the way, the Spanish-French crew Alvarez – Panseri (Can-Am XRS) managed to take 3rd place in the standings, and it was Xavier Panseri who took place as a navigator to Aliyyah Koloc during the winning Hail International Rally before the Dakar. And he is being strongly considered by Buggyra for the 2023 Dakar Rally when Aliyyah and Yasmeen are going to debut at the competition.

Considering the previous result, when Ignacio Casale made his way from 252nd place to 8th position, there was a slight optimism in the Buggyra team. And they were right about that feeling. The Tatra-Phoenix crew was beaten only by Kamaz specials.

“We had a great stage. It was very difficult for us all, as we put ourselves under pressure after yesterday’s result. But we’ve proven that we can be even better,” said Ignacio after his most successful stage in Trucks. “I’ve got to thank Alvaro and Tomáš, for their great work. The plan for tomorrow is simple – to attack, attack and attack.“

“A difficult stage with a great result. In the beginning, we had dunes type 3, complicated ones, but the way Ignacio and Alvaro work together showed that we can do a very good result today. I was glad for such pace because I got a hit today and my back hurts, so I can’t wait to see a doctor. Originally I wanted to say that it can’t be any better, but then I realised that Ignacio will probably prove me wrong tomorrow again,” added Tomáš Šikola.