Casale missed out on podium by 46 seconds, Macháček finished in 8th!

After two 5th place finishes in a row, the Chilean Buggyra driver has decided to push even harder and, in the end, he took 4th position in today’s special. It has also become the best Dakar result in Saudi Arabia in the Trucks category! 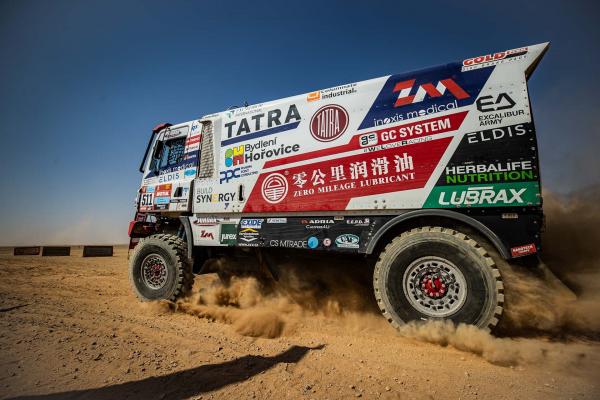 The tenth stage led from Wadi Ad Dawasir to Bisha (757 km / 374 km), and it was all about speed and precise navigation. It was easy to get lost in a web of crossroads, which are so common in this kingdom of oil.

On the 85th kilometre, the Dakar veteran was sitting in 23rd place. However, in the later stages, he found more pace and set the 8th fastest time of the day. That has strengthened his 7th position in the overall standings. “It was a pretty long stage, with fast plains at the beginning. After that, the organisers sent us to the mountains, where the route led around dried up riverbeds. It was a joyful stage. At the end, it was about lots of dust and stones. Luckily, we didn’t have any punctures today, but we lost another belt again. It’s a mystery, but other than that, the Can-Am is working perfectly,” summed up Josef Macháček his stage.

After he elegantly and in a charming way solved the dispute with Martin Macík, whose claims about blocking had proven to be false, Ignacio Casale started his stage in a big way. On the 231st kilometre, he was holding 3rd place, but in the end, he had to settle for 4th position. But he managed to beat at least one Kamaz of Anton Shibalov. “I never drove a truck at Dakar, and I don’t even want to try. But that was a consistent and great performance and that is a big promise for future races. Once again, big thanks to the mechanics who have saved the Dakar, which looked almost hopeless not so long ago,” said the team principal Martin Koloc.

According to Ignacio Casale, it was an easy-going and traditional fast stage. “We were fighting Macík and Shibalov, and we saw that it’s possible to battle Kamaz trucks. We got really close to our first podium. But that still can happen. I’m curious to see the data because the result suggests that this route’s profile is good for the Tatra trucks,” said the three-time Dakar winner.

“Up to the 100th kilometre, we were hitting the top speed of 140 kph, but there was so much dust. However, having a Kamaz right in front of us was a great motivation. Hopefully, it’s going to be happening much more often. Considering the trial route, we had to be very careful about the tyres. The second half of the Dakar is showing that we can match the fastest guys,” added Tomáš Šikola.