Manchester, United Kingdom - This summer, CardPop expands its portfolio of 3D pop-up cards to include a mystical unicorn theme. Each card features a 3D fold-out sculpted unicorn that CEO and founder, Christopher Hoole, said would add an “extra touch of magic to any occasion.” 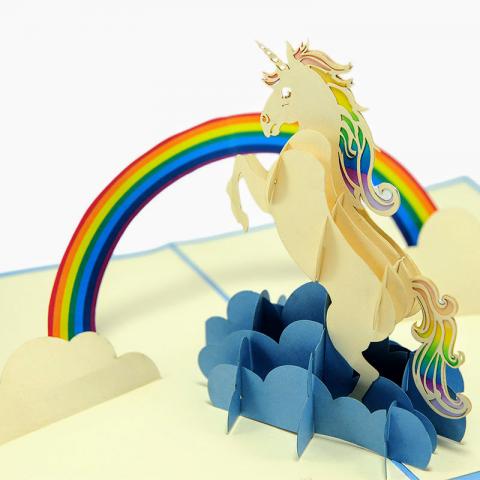 Available exclusively from CardPop (https://cardpop.co.uk/unicorn-birthday-card-thank-you-daughter-granddaughter-pop-up-valentine-leaving-card-uk), the Unicorn cards feature laser cut front covers and a carefully designed unicorn scene in the card’s centre. The card will have a pull-out note section, as well as a matching envelope. Unlike traditional greetings cards, CardPop’s specialty 3D cards can be presented, or showcased both closed, and open flat, with the 3D figure erect.

Christopher Hoole said “we are thrilled to be bringing a new, exciting product to our customers and we couldn’t be more pleased with the design. Greetings cards are a great way to show people how much you care, and our unicorn cards are sure to bring a smile to any face.”

The unicorn pop-up card is priced at £5.88, which includes a white envelope and cellophane wrapping. The 3D cards can be purchased via the CardPop website and delivered to your home. “These cards are perfect for so many occasions, including birthdays, Valentine’s Day, Mother’s Day, to say I love you and so much more,” Christopher said.

Mr Hoole says that their brand of pop-up unicorn cards are a great alternative to mundane, traditional 2D cards. He argues that 3D cards are a more expressive way of showing someone you care, even if you can’t find the right words yourself. “Everyone wants to feel special,” Christopher said, “and our handcrafted cards offer a unique, personal touch that is sometimes lacking in traditional greetings cards.”

Established in 2019, CardPop is a 3D pop-up card company based in Manchester, UK. The company was founded by Christopher Hoole, who oversees every aspect of the product’s development, from creation and design, to orders and shipping. This offers a great sense of personalised customer service and care.

CardPop’s 3D sculptured pop-up designs are inspired by the ancient art of both origami and kirigami, which is the craft of paper folding and cutting. Each card is made from high-quality paper imported from Japan, Korea & Italy. CardPop prides itself on its unique, colourful designs with a card to suit every occasion and taste covering a wide range of themes.