Candidate Lip Sync Battle to be Held Live on Sunday

Liz Lavertu for State Assembly 2020, organizer of the online Candidate Lip Sync Battle, announced the Fundraiser event will be held Live on Facebook on Sunday, 9/6/20, at 4:00pm. 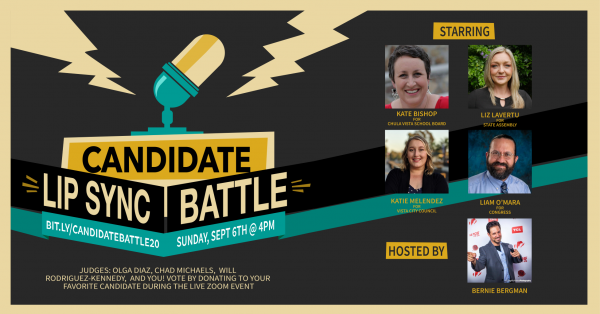 San Diego and Riverside County residents looking for more information on four of their political candidates will have a unique opportunity to get to know them better this Sunday during a Candidate Lip Sync Battle Fundraiser. This event will be steamed live on Facebook for all to watch on Sunday, September 6th at 4:00pm .

Bernie Bregman will be the master of ceremonies for this Facebook Live event, which will include the following talent judges:

The Viewers – The Live Event viewers will have the option to participate as a judge. Viewers will be encouraged to vote for their favorite Lip Sync Battle performance by submitting an online contribution to their candidate of choice. The People’s Choice Award will be awarded to the candidate who receives the most individual campaign contributions during the performances.

The Lip Sync Battle Candidates include:

Full details on the event can be found on the Lavertu website at https://www.lizlavertu.com/lipsyncbattle/

When asked about the reasons behind creating this event, the host of the event, Liz Lavertu said, “Sometimes you need to think outside of the box when the world around you changes. Plus, everyone needs a good laugh right now.”

About Liz Lavertu for State Assembly 2020:

Liz “Elizabeth” Lavertu is a democratic candidate running for California State Assembly District 71. Interested parties can visit the website at: https://www.lizlavertu.com. Liz’s team can be contacted by email at press@lizlavertu.com or by phone at ( 619) 320-5478.