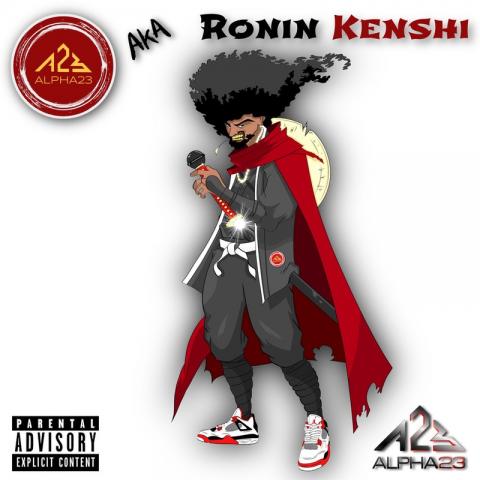 Independent hip hop artist Alpha23 is experiencing explosive growth. He has much to celebrate since 2020 (covid, not withstanding) and has achieved what by any measure would be considered a stellar year for any non-viral independent artist.

Alpha23 blasts into the month of August with a brand new banger of a single “Ronin Kenshi”!

The hot new track introduces Alpha23’s alter ego, “Ronin Kenshi”, featuring a sound that is inspired by Japanese culture and his love for anime. The up and coming star from Atlanta, Georgia serves #BARS on this one! He raps about his everyday life and current stature as an artist in the hip hop industry, while also highlighting his personal relationships with women and a tendency to spend frivolously on luxuries most independent artists are usually unable to afford at this point in their career. The overall tone of the song is very assertive, playful, and witty.

As previously mentioned, this Georgian native (by way of New York), is having a banner start to his career. Everyone is highly encouraged to check out his multimillion stream producing singles,” HUH?!”, “Move On!”, “#RNS”, “Check Up” and one of his fastest moving records to date, “F.O.Y.H.”.

Full details and links to stream the song when it drops can be found here: Alpha23 – Ronin Kenshi (available on all major streaming platforms).

The rising rap and hip-hop artist is set to drop more music in the coming months. Fans can expect to hear more of Alpha23’s newer sound following the release of “Ronin Kenshi” and are encouraged to learn more and sign up for updates on the rapper’s official website, https://theonlyalpha.com.

Businesses interested in partnership or media opportunities can also visit the official website or send an email to mvmentglobal@gmail.com.