After a successful circuit season for the Buggyra Racing team, the Dakar Rally has taken over. On the agenda for the next weeks ahead is a testing session culminating in a rally race. The mechanics team is currently based in Dubai, reinforced by David Vršecký. 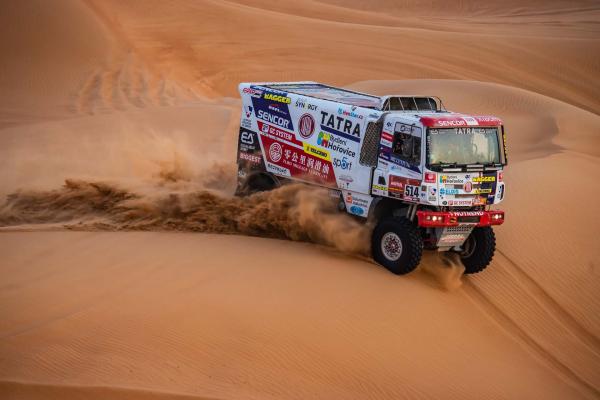 The mechanics will have their work cut out for them until the drivers arrive. “We have to prepare the cars, we have a lot of new components, we know exactly what we require from each of them. However, in addition to the A variant, we are also ready for the B plus C, maybe even Z variants,” explains David Vršecký with a laugh, adding that the driver line-up will consist of Josef Machacek, Ignacio Casale, Téo Calvet, plus Aliyyah and Yasmeen Koloc, in addition to the driver whose name remains secret. “Téo nominated himself because he wants to try it in the sand, there are no limits to goodwill and volunteering.”

According to team principal Martin Koloc, the lengthy testing culminating in participation in the Hail International Rally, which is part of the FIA World Cup For Cross Country Rallies and kicks off on December 6, gives answers to questions related to the global team’s desert lull so far. “We tested in the desert until the start of the circuit season, plus Ignacio has the dunes behind his house. I’m glad that the fans are interested in our activities, however, this year the races in Europe and North Africa did not make sense, we have chosen a different concept of preparation based on the existence of our bases in Saudi Arabia and the UAE,” confirmed the head of the team, while according to David Vršecký, the Hail International Rally will show the state of the art. “Nothing should surprise us, but we will also be able to react to surprises.”

While the driver line-up is assumed but not certain, the certainty is instead the non-participation of the Koloc sisters in the upcoming Dakar. “The girls would like to go, but I have exercised my right of veto. They have a lot on their minds for the whole season and, given their participation in the Dakar Rally 2023, they should enjoy, probably for a long time, the last winter holidays,” says Martin Koloc.

Find out more at ww.buggyra.com