The first post-Covid European Truck Racing Championship ended with a race in Misano. It was a historic championship for Buggyra, for the first time fielding three specials under its own direction, with the Buggyra Academy enjoying numerical superiority. 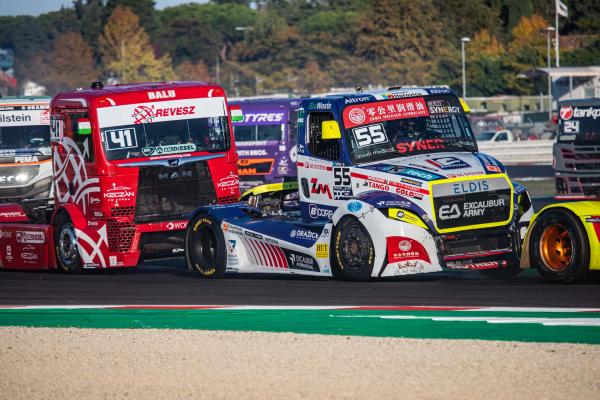 As team principal Martin Koloc let it be known before the race in Misano, truck racing and the championship promoter won out in the first place. “We have had more successful weekends, but overall we are satisfied. Adam defended his position in the European top flight, Téo fought until the last day for the elite six, while Aliyyah, as the youngest ever driver in the championship, gained a lot of invaluable experience,” Martin assessed. “The Buggyra Academy concept has clearly proved its worth, with the average age of the pilots not even twenty-five, we have a lot to build on.” From his position as owner, Martin then praised the entire team’s performance. “We put three cars in each race, everything was going well from an organisational point of view. Definitely thumbs up.”

Adam Lacko arrived at Misano in the position of a driver who could have won the title in equally extremely fortunate circumstances, but equally, there was the option of dropping to fifth place. Therefore, he considers the final bronze position and the defense of the position from the 2019 season, a success. “I have to congratulate Sasha on his second place, he is going from hunter to prey. Unlike Jochen and Antonio, I stayed in the elite three, I wanted to fight for second place, so we did everything, but somehow it didn’t work out,” said Adam after the last race of the championship. “I can’t remember the last time I came home without a trophy. But that’s what racing is all about. There is no point in dwelling on what would have happened if I hadn’t hooked Antonio in one of the races, that’s just the way it goes sometimes. It’s just a dumb weekend and that’s it.” From his position as the only rider not to miss the overall podium since 2015, Adam spoke highly of the team’s work. “We broke a few weekends in our favour this year on Sunday, so after Saturday it was going to be a very long night for the guys. We’ll have our work cut out for us over the winter, but we have a lot to build on.”

What’s more, the only seventeen-year-old racer Aliyyah Koloc became a hero against her will at the very end of the championship as her Buggyra almost caught fire in the last race and the organisers raised red flags. “David told me that he experienced something similar in his first season at the Nürburgring. It was a very contact racing weekend with dramatic starts,” Aliyyah said after the race, adding that she would leave the evaluation to those called upon. “Anyway, I’m happy with myself.”

Téo Calvet experienced two diametrically opposed days. While he shined on Saturday, taking second place in the second race, he didn’t finish either race on Sunday. “Sometimes it just comes together. First you stand on the podium alongside Jochen and Norbert, who have nine titles between them, and the next day you put two zeros,” assessed the new French champion, who took second place in the Goodyer Cup and jumped eighth overall. “The finish could have been better, but overall I’m satisfied.”

A podium is a podium

In the team competition, the winner was already known well in advance, with Buggyra losing the battle for second place by seven points to the pair of Jochen Hahn – Steffi Halm defending their 2019 title. “It’s a shame, a few points would have been enough. Sometimes it just doesn’t work out, racing is unpredictable and beautiful at the same time. On the other hand, a podium is a podium,” said chief of communitation Jan Kalivoda, assessing the fight for the Constructors’ Cup.

Find out more at ww.buggyra.com