Every year thousands of Strokes are missed or misdiagnosed in the United States. Knowing the symptoms and getting early treatment is very important, but sometimes even that is not enough. 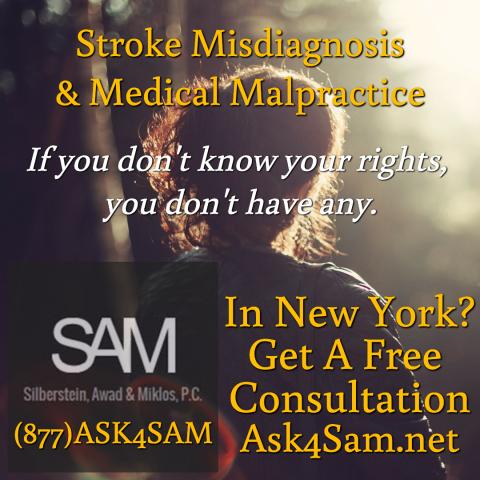 The number one cause of serious, long-term disability in the United States is stroke. On average, someone suffers a stroke every 45 seconds according to the American Stroke Association. Every year around 795,000 people suffer a stroke in the United States, and approximately 600,000 of those are first-time attacks. However, a cross-sectional analysis looking at inpatient databases from 2008 and 2009 across 9 US states suggested that there were 2,243 probable missed or misdiagnosed strokes, and 23,809 potential missed or misdiagnosed strokes.

Persons in the New York City area wishing to speak with an attorney specializing in missed or misdiagnosed strokes and stroke complications can reach out to the law firm of Silberstein, Awad & Miklos, P.C. by calling toll free 877-ASK4SAM (877-275-4726) or visiting https://ask4sam.net/new-york-medical-malpractice-lawyer/failure-to-diagnose-stroke/

“A stroke can occur anywhere and at any time,” shared a spokesperson for Silberstein, Awad & Miklos, P.C. (SAM). “The outcome or prognosis often depends on the promptness of the diagnosis and treatment. There are two basic types of strokes. One is called red stroke, otherwise known as a hemorrhagic stroke. This occurs when a blood vessel in the brain bursts, causing blood to spill into the spaces surrounding brain cells. The other is called a white stroke, also known as an ischemic stroke. This occurs when the blood supply to a part of the brain is interrupted by a clot or spasm. In both cases, the brain cells are deprived of blood, nutrients, and oxygen. Without proper and timely treatment, brain cells die. This can lead to symptoms including: Numbness or weakness especially on one side of the body; Confusion or trouble speaking or understanding speech; Trouble seeing in one or both eyes; Difficulty walking; Sudden headaches with no known cause.”

“F – Face Drooping: While relaxing your face, look to see if your smile is uneven. Strokes can cause muscles in your face to go numb, which means you might not feel the difference. You would have to look for it.

“A – Arm Weakness: If one of your arms feels weak or numb, try lifting both. If one is drifting downward, that’s a sign of a stroke.

“S – Speech Slurring: Slurred speech is a major sign of a stroke, and it’s not always apparent in the early stages. If you notice slurred speech and either of the other to signs, get to a hospital.

“T – Time to Call 911: If you even think there’s a chance it’s a stroke, don’t risk it. Call 911 and worry about everything else later.” (https://ask4sam.net/blog/recognizing-signs-stroke/)

Unfortunately thousands of Strokes are misdiagnosed every single year, bleeding to death or an increased severity of problems that can last a lifetime, particularly if untreated or without proper therapy.

Persons in the New York City area wishing to speak with an attorney specializing in missed or misdiagnosed strokes and stroke complications can reach out to the law firm of Silberstein, Awad & Miklos, P.C. by calling toll free 877-ASK4SAM (877-275-4726) or visiting https://ask4sam.net/new-york-medical-malpractice-lawyer/failure-to-diagnose-stroke/