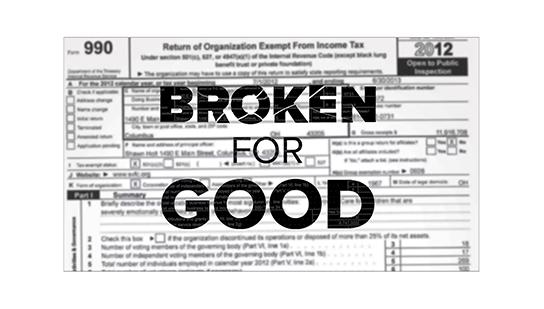 QUITMAN GA – November 23, 2020 – Broken For Good Film Shoot will be hosted January 13-14, 2021 by CineVantage Productions and PhilanthroFilms at 2330 N. Webster St. Quitman, GA 31643. Documentary film makers Honnie Korngold, Nicole Brose and PhilanthroFilms co-founder Cathy Parker are calling on nonprofit administrators, board members, volunteers and donors from across the Southeast to be interviewed and featured in the upcoming film BROKEN FOR GOOD: The Way Charity Works In The United States of America.

Would You Like To Interviewed for BROKEN FOR GOOD?

At a recent press conference Honnie Korngold, CineVantage Production head shared, “We’re reaching out to nonprofit executives who have an opinion about the state of the charitable sector. Leaders interested in playing a part in this ground-breaking documentary can contact CineVantage at at 323-904-9363 or honnie.korngold@nonprofitdocumentary.org.”

BROKEN FOR GOOD: The Way Charity Works In The United States of America takes viewers on a wild ride into the world of nonprofit management. Hailed as both provocative and uplifting BROKEN FOR GOOD uses an “emperor has no clothes” approach to reveal the current state of the charitable sector. Relying on humor and vivid story-telling BROKEN FOR GOOD challenges the existing order of things inspiring viewers to solve global problems by transforming the nonprofits in whom they invest. This feature length documentary film is in its fourth year of production and is slated for release in Fall 2022. BROKEN FOR GOOD was intended to be released much earlier but had to be extended because of the myriad of revelations the filmmakers discovered during their research. What was once a 2-year film shoot has turned into a 5-year passion project, in part, because of the overwhelming praise and response from charitable leaders.

BROKEN FOR GOOD is based, in part, on the research and writings of professor Kathleen Robinson’s New Guidelines for Nonprofits as well as author Jimmy LaRose’s industry bestseller RE-IMAGINING PHILANTHROPY: Charities Need Your Mind More Than Your Money. Also featured in this documentary are Melinda Gates of the Bill & Melinda Gates Foundation, Dan Pallotta of the Charity Defense Council, Juanita Wheeler of Full & Frank, Nat Ware of 180 Degree Consulting and Diana Ruano of the UN Refugee Agency.

Broken For Good Ensures People Experience a Life Worth Living

In a recent interview Jimmy LaRose shared, “BROKEN FOR GOOD introduces viewers to a series of startling “behind the scenes” stories that reveal the truth about the current state of nonprofit management. These revelations are each paired with bold solutions that, with the viewer’s help, will transform the charitable sector. LaRose continued, “This film will inspire people to the roles charity can play in THIER PERSONAL LIVES by answering deeply held personal questions

Regardless of one’s political persuasion, politics, theology, or method BROKEN FOR GOOD celebrates the countless ways OTHERS HELP OTHERS ensuring people experience a life worth living.

BROKEN FOR GOOD reveals why the nonprofit sector has been saddled with a century’s worth of wrong-thinking that’s paralyzed charities for over fifty years. Department of Commerce statistics demonstrate that charities have been stuck since 1970, hovering right around a GDP growth-rate of 2%. During that same period, the private sector have enjoyed unprecedented financial success, gaining a percentage of world market-share never before seen in the history of man. BROKEN FOR GOOD will demonstrate the reasons why charities have failed to embrace the free market enterprise principles we know work in the for-profit sector and can guarantee significant charitable impact. Nonprofits must start “solving problems” completely instead of “servicing problems” in perpetuity.

It’s important to recognize that nonprofits are not alone in this effort. Democracy, governments, marketplace economics, entrepreneurship, and for-profit corporations provide the greater percentage of resources humanity needs to experience a life worth living. The public and private sectors play the larger role in advancing causes and improving quality of life. (Case in point…it’s probable that you are less dependent on the charitable sector, and rely more on the private and public sectors for your well-being. Regardless, there will always be those 20% of people who the public and private sectors will miss. These people are dying, or worse, have no capacity to live a life worth living. Without the transformation of the charitable sector (which one could argue is BROKEN FOR GOOD) they have no hope. We need to solve these problems and this documentary will show you what role you can play.

In closing, the challenges BROKEN FOR GOOD confronts will require viewers to wade into the muck, mire, and mess of people, process, and product problems (which, historically, don’t respond well to intervention). The origins of these “problems” do not come from one place, but many, and so will the solutions. This film’s task is to define these inherent complexities in a manner that ensures they are defeated.