Seongmin Yoo is a Korean-born conceptual and installation artist that now lives in America. Known for her inventive use of space and materials, her body of work involves collage, painting, video, performance, and installation. 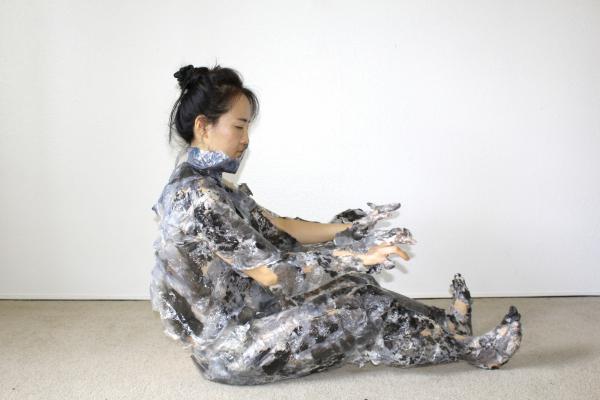 Seongmin Yoo is a Korean-born conceptual and installation artist that now lives in America. Known for her inventive use of space and materials, her body of work involves collage, painting, video, performance, and installation. Seongmin often utilizes traditional Korean techniques that her mother taught her. Seongmin says she owes most of her success to the decades of experience and extensive knowledge gifted to her by her mentors.

Seongmin’s work deals with both her personal struggles and political struggles. Her artwork has often dealt with spirituality, the body, and women’s rights. She uses the raw materials she collects in nature to speak about the cyclical nature of life and the inevitability of being repurposed or reborn. Lately, however, she has focused on the interaction between her east and west identities. Her current show, “Bondage to Freedom”, addresses the newfound freedoms and experiences that she’s had living in America as an artist and as a woman. She discusses that in Korea, women are pressured to be submissive and demure but in America she is encouraged to be expressive, particularly as an artist. She also finds that her pieces, while still made with Korean artistic techniques, are having more and more American influences. As the effects of Americanization become more salient and her world becomes more of a melting pot, she is forced to reckon with the dissonance that comes with merging multiple established identities.

A contemporary of Wangechi Mutu, Lin Tianmiao and Tania Brugeera she is working in the ethno-futurism aesthetic. Her work features startling hybrid figures and otherworldly images that evoke the idea of breaking free from a life of servitude. In her current body of work, she is using video and installation art to address ideas like intruders, torture and subjugation. Problems that women face in Korea like footbinding, misogyny, and sexist gender roles manifest in Seongmin’s surrealistic figures being shackled, attacked, and, ultimately, liberated. Provocative, powerful, and profound, Seongmin Yoo is considered one of the most important conceptual installation artists of our time.