Shawn Hammonds' Black Belt promotion in the Middle Tennessee State University (MTSU) gymnasium was attended by over 300 students from around the country. 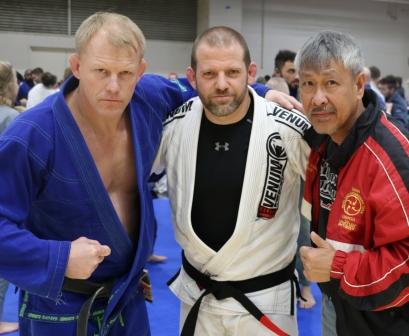 MURFREESBORO, TN — February 21, 2020, in Murfreesboro, Tennessee was a surprisingly beautiful day, nice and warm, not cold like it was in Dayton where this journey started. The next surprise was how difficult it was to find a parking place around the Middle Tennessee State University recreation building. This is where the Black Belt promotion held in the Middle Tennessee State University (MTSU) gym. Upon entering the gym and seeing the over 300 people attending the rank-promotion event being held by nationally recognized and Pan-American champion Brazilian Jiu-Jitsu (BJJ) Master, Sensei Shawn Hammonds, that was not that surprising at all. Sensei Hammonds has been the technical advisor instructor for the BJJ program at Dayton’s TAMA Family Martial Arts Center since 2008, occasionally traveling to TAMA to teach and evaluate the students’ progress. He even gets out on the mat and rolls with the students personally to gauge their progress.

The event in Murfreesboro was a gathering of grapplers and BJJ practitioners from all around the USA. One could barely maneuver themselves about the gym. Between the large crowd of spectators and the gym mats spread out across the gym floor in anticipation of the days’ events, the venue was packed! In the center of it all, there was Sensei Hammonds, at his best with a microphone in his hands, exciting the crowd with the announcement that the event was getting ready to begin.

The final surprise was the reserved for Dayton-area Brazilian Jiu-Jitsu instructor, Thomas “J.R.” Reynolds. Reynolds has been teaching Brazilian Jiu-Jitsu at the TAMA Family Martial Arts Center in Dayton, Ohio, for 7 years. He has been studying the so-called gentle art of Brazilian jiu-jitsu for nearly 14 years. What he did not know today, however, was that he, too, was going to be promoted to the prestigious rank of Black Belt. TAMA owner, Manuel Taningco, and Reynolds’ friends, family, and students had kept this fact a secret from Reynolds but were all in attendance to witness this day.

After many names were called, Sensei Hammonds finally called Thomas “J.R.” Reynolds’ name. The successful surprise was evident, as Reynolds was at first speechless. Then Reynolds’ face lit up as the surprise hit him. He was about to receive his coveted Black Belt personally from his long-time mentor, instructor Sensei Shawn Hammonds. Sensei Hammonds gave Reynolds a big hug as he had done throughout the ceremony. Sensei Hammonds then presented Reynolds with his Black Belt certificate, took off Reynolds’ old brown belt, and presented him with a new Black Belt around his waist. This event was truly a celebration of the aches and pain, the grueling workouts on the mat, and the test of time of close to 14 years when Reynolds first started jiu-jitsu at the TAMA Family Martial Arts Center.

Reynolds’ primary jiu-jitsu instructor and owner of TAMA Martial Arts Center, Manuel Taningco, stated, “J.R. really deserves this! He has contributed so much to the growth of the BJJ class at TAMA. J.R. has stepped in to lead the class here for the last 7 years. J.R. actively trains alongside his students to show that he can practice what he preaches! He also has won numerous competition championships. What I really admire is that J.R. has demonstrated patience, a willingness to grow, and giving nature to help others to be their best. His loyalty to the art and to the TAMA Martial Art Center is relentless and undeniable. J.R. has shown true dedication to his students and his own BJJ practice for nearly 14 years. This black belt is a testimonial of his dedication and is something to be celebrated and to brag about. But J.R. is humble and I have been fortunate enough to watch him grow over the years not only as a martial artist but also as a person with maturity and responsibility.”

After the ceremony, there was a workout after the promotion. Sensei Hammonds and two other guest instructors, John Salter and David Rielly, shared their unique technique to the crowd of grapplers. John Salter is a Brazilian jiu-jitsu black belt under Shawn Hammonds, founder of the Salty Dog Jiu-Jitsu Academy as well as a professional mixed martial arts (MMA) fighter with a vast wrestling career. David Riellyis a pro-jiu-jitsu black belt champion is also under Team Shawn Hammond’s competition.

There barely seemed to be enough room and mats to go around for the huge gathering of BJJ practitioners. With mat space at a premium, some even were practicing on the gym’s wooden floor! It was the perfect culmination of this celebration. Sensei Hammonds was clearly proud of his students and his newly promoted Black Belts and brown belts held in Middle Tennessee State University (MTSU). Taningco added, “Events like these ensure the legacy continues, and Sensei Hammonds’ dedication embodies the phrase, ‘A good man, with good deeds, shall continue forever.’”