Bethesda Siblings To Represent US At Acrobatic Gymnastics World Championships 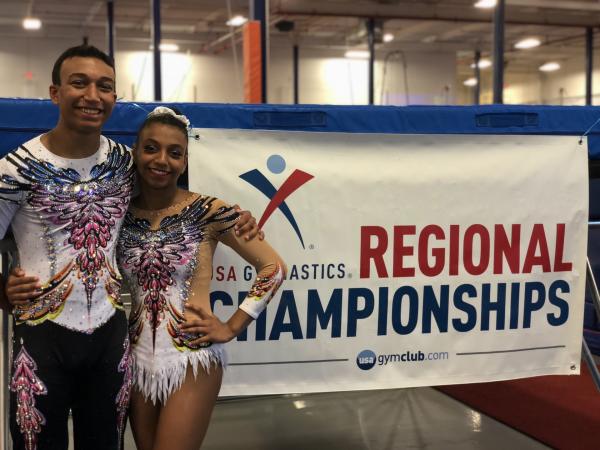 On April 26, 2021, USA Gymnastics announced its selection of Bethesda-based siblings Nicole and Shawn Powell to the US team for the upcoming 2021 World Acrobatic Gymnastics Championships and World Age Group competitions in Geneva, Switzerland. The award-winning brother-sister duo overcame daunting physical and emotional challenges to win their coveted spots on the 2021 team.

“My brother and I are thrilled to represent the US at the World Acrogymnastics Championships,” says Nicole Powell. “I was hoping to make the US team four years ago but I fell during the nationals. Thankfully, I wasn’t injured but that fall cost me and my partner a shot at the USA team that year. We were devastated.”

Nicole is referring to the Milwaukee 2017 USA Gymnastics Championships where she fell after coming out of a complicated acrobatic gymnastics maneuver. She and her “acro” partner then split—not because of the Milwaukee defeat, but simply because Nicole, then a healthy 13-year-old, was outgrowing her partner; she could no longer support her weight.

Making the USA team seemed all but impossible in 2017 when Nicole’s sister suggested Nicole pair up with their brother Shawn. Shawn, then 15 years old, wasn’t particularly athletic and had no gymnastics experience whatsoever. Nonetheless, he agreed and after a year of grueling daily workouts and emotional ups and downs, the team won the gold at the 2018 USA Nationals for Acrobatic Gymnastics. Shawn and Nicole went on to win five more gold medals that year, and several more in 2019 until COVID-19 shut down sporting events in 2020.

“When I first agreed to partner with Nicole,” explains Shawn, “I told myself I’d quit if I didn’t like it. But I then realized how cool it was to push myself to the limits of the human body’s capabilities. And it was really gratifying when people came up to me after a performance and told me how much they loved it, or how beautiful they thought Nicole and I were. Once you get a taste of that, you kind of fall in love with it.

The siblings ended their partnership in 2018 when Nicole once again outgrew the “top” position and would need to assume the bottom position, referred to as the “base,” from then on. She went on to work with various women’s acrogymnastics groups until becoming part of her current three-woman acro team chosen to represent the US in the 11 to 17 age group at the upcoming World Age Group competition. As for Shawn and his new female partner, they will be alternates in the 12 to 19 age group.

Acrogymnastics is not the only interest Shawn and Nicole have in common. The siblings also work in the thriving family business—StarBrite Dental in Rockville, MD–founded by their mother, Dr. Maryam Seifi. “I’m so proud of what Shawn and Nicole have accomplished,” says Dr. Seifi. “Most younger acrogymnasts are home-schooled to allow them more time to work out. Not Shawn and Nicole—they both attend demanding private schools and keep up with their schoolwork while competing.”

In addition to their administrative jobs at StarBrite Dental, the Powell siblings have performed gymnastics routines on StarBrite’s behalf to raise awareness and funds for the Special Olympics of Maryland Organization.

As for the future, Shawn plans to retire from the sport after the World Championships. Already accepted into the University of Maryland’s aerospace engineering program, he intends to work for NASA as an aerospace engineer and someday open his own private aerospace company, a la Space X. Nicole is undecided on her next step but will either stay with acrogymnastics for another year or retire after the championships. Regardless, she intends to ultimately follow in her mom’s footsteps to become a leading dentist in the community.

StarBrite Dental is a full-service dental practice located in Rockville, Maryland, serving the communities of greater North Bethesda, Potomac, Rockville, Silver Spring, and Washington, DC. StarBrite’s mission is to provide the highest-quality dental care possible with sincerity and friendliness and give patients the oral health they’ve always but were unable to achieve. Services offered include general, cosmetic and emergency dentistry as well as sleep-disordered breathing treatment. StarBrite was founded by veteran dentist Dr. Maryam Seifi, a leading dentist with over twenty years’ experience. Dr. Seifi has been honored with multiple national and local awards for technical excellence in dentistry, including the Doctor’s Choice Award for Most Voted Doctor.