Russell Brooks’s brand new book, “Jam Run,” is coming in fall 2022. It’s targeted at fans who love a great nail-biting suspense thriller that will keep them on the edge of their seat from the beginning to the last page. Visit https://russellparkway.com for more details. 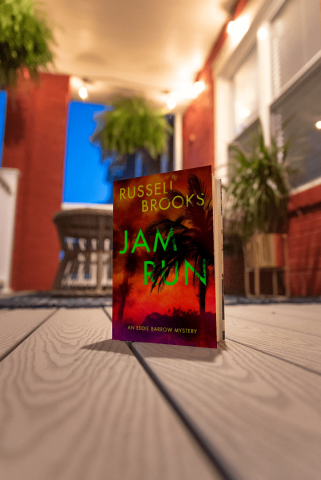 Passionate about social justice Russell Brooks is launching His brand new book, “Jam Run”. The book is set to go live around the fall of 2022, available in all online and select brick and mortar bookstores, and is expected to become a big hit with fans who love a great nail-biting suspense thriller that will keep them on the edge of their seat from the beginning to the last page.

More information on the book can be found here: https://russellparkway.com

This is the fifth book Brooks has authored. The book was written with the aim in mind to respond to the lack of suspense thrillers with predominantly Black Caribbean characters. There’s also particular excitement about this launch because it will be Brooks’s fifth suspense thriller after a seven-year hiatus.

Jam Run sets its main focus on how anti-LGBTQ laws that discriminate against a community harm society. Readers will likely find a particular interest in the story because it focuses on Caribbean culture. But even more interesting is that Brooks is an author of Barbadian descent. The book’s cover art was created by Jeroen ten Berge and Jam Run is being released by the author.

Russell Brooks has a degree in Biology and a background in insurance and finance. But equally important is his passion for social justice—especially for communities who’ve had their rights ignored.

When asked about why they wrote the book, Brooks said: “to write about subject matter that he’s passionate about while continuing a series”

Brooks has hopes that the book will open the door for other Black thriller authors who are either born in the Caribbean or who are of Caribbean descent. This positive outlook from the author is certainly a testament to their optimism considering some of the mishaps during its creation. At one point he was refused several writing grants which would help him absorb the expensive publishing process.

“Raising the funds on my own was also very challenging,” said Brooks. “This caused several delays with the publishing process. Contrary to a traditional publishing company that has vast resources to give their books the exposure needed, I depend mostly on word of mouth.”

In a recent interview, the author made a point of thanking his editor Lisa Dawn Martinez, graphic book cover designer Jeroen ten Berge, Norris and Samantha Douglas who assisted in fact-checking the Jamaican content, and Signe Nichols who’s always produced his books in both eBook and paperback formats. For their part in the creation of the book, Brooks thanked journalist and author Carolyne Van Der Meer who coached him on media relations. He would also like to thank journalist Richard Burnett for connecting him with influential people within the Montreal area who helped him spread the word. Last but not least, Brooks wants to thank Preston Martelly of JavaLogix.ca who assisted him in redesigning his website.

Those interested in learning more about the book can visit here: https://russellparkway.com