Abraham Gabriel Pagtama a Male from Southern California is launching a brand new book novel, “BASED ON TRUE EVENTS Watsonville Riots” available at Amazon.com on the Amazon Kindle App get it by going to the Apple App Store and Google Play. More information at: https://basedontrueeventsbook.wordpress.com/ 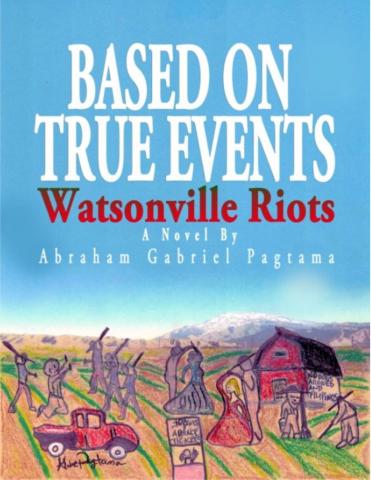 AUTHOR, PRODUCER, WRITER, DIRECTOR, EDITOR, DJ, Coach, Megaworld International Real Estate Agent, Investor, Entrepreneur. Abraham Gabriel Pagtama always known as “Gabe” a Male from Southern California USA is launching a brand new book a novel called, “BASED ON TRUE EVENTS Watsonville Riots”. The book is now available for Pre-order set to go live selling copies world wide with a book release date on April 1st, 2019, the book is available on Amazon.com and on the Amazon Kindle App where you can get it through the Apple App Store and Google Play Store or Amazon.com and is expected to become a big hit with fans of the University College Students world.

More information on the book can be found here: https://basedontrueeventsbook.wordpress.com/

This is the first book Pagtama has authored. The book was written with the aim in mind to educate University college students who would like to study the history of Asian Pacific Americans and Overseas Filipino Workers specifically Filipino American history to take you on an adventure, journey and entertain you in helping you better understand the world these people were living in during the era of the nineteen thirties. There’s also particular excitement about this launch because excitement surrounds this book launch because it will be the authour’s much anticipated first release it will unveil all the author’s best secrets told to in person word of mouth by first encounter ancestors shared stories during intimate settings and told to you in words in this amazing book.

The author has a background as a PRODUCER, WRITER, DIRECTOR, EDITOR, DJ, basketball coach, Real Estate agent, Investor, Financial professional, Entrepreneur. His background helped shape the creation of this book told by first person account stories passed on by generations of first time OFW Filipino Americans stories newly written in this semi-fictional book for you to discover about life of FilAms during the era of the 1930’s.

When asked about why he wrote the book, Pagtama said: “What compelled me to write this new book novel was that I did not want to waste anymore time, the opportunity and rich history in writing about the OFW’s better known as the Overseas Filipino Workers now estimated to be over ten point five million worldwide. They are everywhere all around the globe. I want to shed light on the stories about the Filipinos global. There are so many stories that go untold and I wanted to share this rich historical story with the world about a group of young Filipinos coming to a new country and living America so I decided to write this story and paint a picture with words on the possibilities of the lifestyle of Filipino Americans during the era of the 1930’s some consider the lost generation bringing it to life forever though this book.”

Pagtama has hopes that the book will take you on an adventure and help you better understand the world these people were living in during the era of the nineteen thirties. This positive outlook from the author is certainly testament to his optimism considering some of the mishaps during its creation. At one point there were several mishaps, for example at one point this book novel was originally just an idea during many brainstorming conversations with my dad Abe and then for over three years now the process turned into a business plan, a full feature length screenplay and then finally a book novel expanded giving more juicy details into the lives of these Filipino men and life of people in America during the era of the 1930’s.

In a recent interview, the author made a point of thanking people dear to his heart the author thanked his dad Abe, mom Rhoda, sister Karen, family, teachers, mentors and God his love and savior Jesus Christ for their part in the creation of the book, saying: “Thank you mom and dad the best parents ever for bringing me into this world and blessing me with a great life.”

Those interested in learning more about the book can visit here: https://basedontrueeventsbook.wordpress.com/