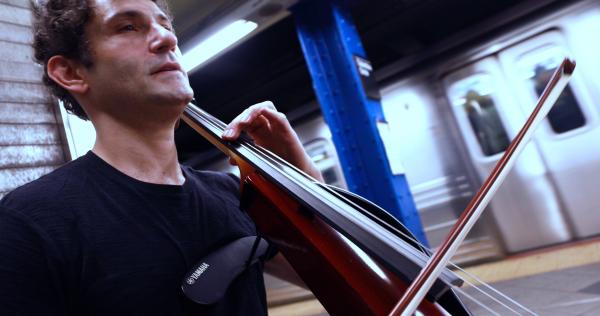 Intensely inspired by classical music as a young child, Henderson grew up training with top musicians including Yo-Yo Ma, Sir Yehudi Menuhin, and Leonard Bernstein protégé Eiji Oue. Henderson made his professional solo debut at age 13 and excelled as a traditional performer. However major orchestra closures, constant budget cuts to arts organizations and programs, and a growing, painful awareness of the major disconnect between mainstream culture’s perceptions of classical music and the actual felt experience of the artform catalyzed Henderson into action.

Finally breaking with traditional boundaries, on February 20, 2010, Henderson offered his first in a passionate campaign of free performances of Bach’s Suites on traditional cello in the subways of New York City. With classical music audiences on the decline, he wanted to “sow the seeds for future generations of classical music lovers” by breaking the music out of its traditional box and exposing people to the enchantment of the live art form.

A year later he invited other musicians to join him for Bach’s birthday on March 21. Within four years, 1000s of musicians in over 200 cities in 40 countries around the globe joined in bringing live Bach to the people in countless public places. The global celebration happened every year since, slated for March 19-25 this year.

For details on performance times and locations email mailto:dalehendersonmusic@gmail.com or call (617) 872-6414