David Bianchi announces the release of a groundbreaking Spinema NFT titled “Break The Bars” on MakersPlace, which includes the first ever movie screening on Dencentraland. 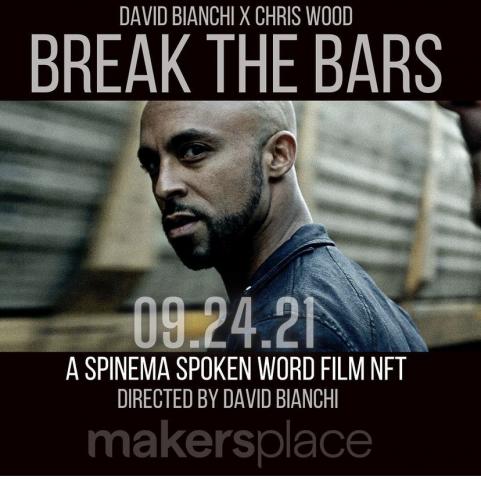 This NFT launch is community driven and is about the reality of inner-city children and their stories delivered through Spinema. (Spinema means Spinning Cinema Through Spoken Word)

The NFT drop is launching through MakersPlace , a Global NFT marketplace, and begins with a premier of the movie in MakersPlace Decentraland Stadium (DCL) on September 23, 2021, with the Seven-day auction beginning on September 24, 2021. A majority of the proceeds are allocated for New Earth Foundation and Charitas Charity as well as honoring the memory of Jin Woo.

One of One = The film

Raffle for the One of One Film

“The purpose of this NFT launch is to bring awareness to the struggles of inner city children and share their hopes and dreams for a better childhood and future,” said Bianchi.

For more than 17 years, David Bianchi has produced cinematic spoken word films that have moved the art and film industry. David is now the trademark holder of “Spinema” which is a new art genre.

“When people hear spoken word, they know what to expect, and now when they hear Spinema, they also will know what to expect,” Bianchi added. “High-concept, cinematic immersive experiences told entirely in spoken word poetry are delivered by some of the brightest film directors and poets in the world. I’m thrilled to be one of the pioneers in this type of NFT launch.”

To sign up for the premier, register at Decentraland.

David Bianchi is a multi-hyphenate quintessential artist. Globally known as an actor, filmmaker, and spoken word poet, Bianchi seamlessly blends together these passions in his very own art genre he calls Spinema (spinning cinema through spoken word). These poetic-cinematic experiences are currently taking the NFT art space by storm, leading to thousands of dollars being donated to charity and a feature in Forbes.

As an actor/filmmaker, David has over 100 professional credits and can be seen in studio films and major TV Networks. Bianchi’s work in front of the camera has earned him membership into the very prestigious Academy of Television Arts and Sciences. Currently, he can be seen in Netflix’s Queen of the South, Ruthless on BET, and SEAL Team on CBS.