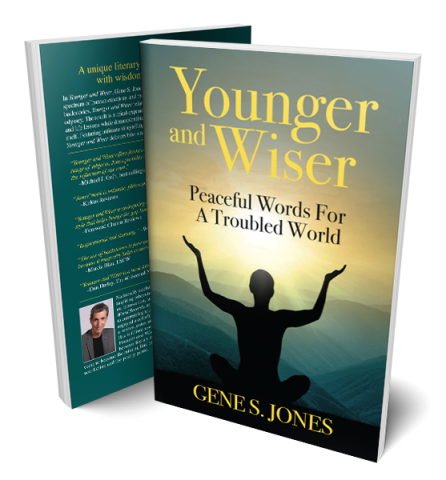 Katonah, NY (September 2020)— Dreamquest Publishing is proud to announce the launch of Younger and Wiser: Peaceful Words for a Troubled World, a groundbreaking literary collection by Gene S. Jones.

Nominated for a 2021 Pulitzer Prize, Younger and Wiser highlights the author’s extraordinary storytelling ability as it invites readers to share an intimate glimpse into Jones’s eclectic career and personal odyssey. Exploring a multitude of topics such as the many sides of love, loss of a parent, creativity, meditation and even 9/11, Jones illuminates a lifetime of intriguing experiences. With clarity and precision, he depicts the raw emotion of “crying like a man” while also celebrating the simple pleasures in life, thus revealing profound insights into human nature. Presented in an innovative format replete with backstories, Younger and Wiser is a unique book that masterfully highlights its author’s expansive view of humanity in a manner that also inspires each reader’s creativity and personal growth.

Younger and Wiser: Peaceful Words for a Troubled World (Dreamquest Publishing; ISBN: 978-0998324081, $14.95) is available in paperback and digital formats from Amazon and other major book outlets. For more information or to request a review copy, visit https://dreamquestpublishing.com/.

Nationally acclaimed game show host Gene S. Jones has spent his life entertaining and inspiring other to achieve creative excellence. From seminars on innovation to more than thirty-five years of professional speech writing, the breadth of Jones’s extraordinary career in the world of entertainment spans more than four decades.

As a result of his work with the Guinness Book of World Records, Jones created the ingenious GIMME A HINT!® Trivia Game Show. Touring nationwide, he has performed this comedic theatrical game show more than twenty-five hundred times in the past three decades. In addition to hosting game shows, Jones frequently teaches his three signature seminars: The Nine Pillars of Creativity, The Art of Presentation, and The Art of Breakthrough Thinking. For major events and special occasions, Jones often writes customized speeches for his numerous long-time corporate and private clients.

Jones’s most eclectic pursuit is in the field of Sound Healing. Utilizing Tibetan bowls, crystal bowls, tuning forks and exotic musical instruments, Jones has developed a sophisticated transformational sonic protocol. This unique program creates an exhilarating experience for individual clients as well as larger group meditations. In addition to leading transformational sound workshops, Jones is also a recipient of the Friendship Award from the United Nations for his concert performances with crystal bowls.

Throughout his career Jones has written in a variety of genres ranging from radio commercials to murder mysteries. His unique backstory format in Younger and Wiser bridges the gap between literary memoir and free-form prose forming a powerful synthesis that is intimate and insightful.

Penned over the course of Jones’s extensive career, often in exotic locations around the world, the stories of Younger and Wiser were collected in a leather briefcase that became their home for decades before being dusted off and distilled into passionate reflections brimming with wisdom and humor.

For more information about Gene S. Jones, visit his websites: http://www.gimmeahint.com/ and http://triviation.com/.