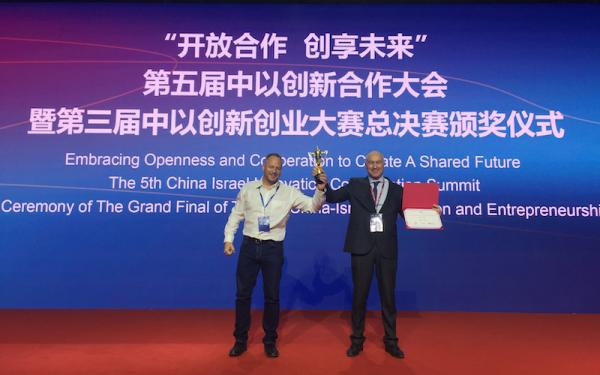 Atlantium Technologies recently participated in two China-Israel initiatives with the goal of showcasing its commitment to developing environmentally friendly water treatment technologies and expanding the company’s role in Asia through strategic partnerships and other ventures. Atlantium was invited to participate in the China-Israel Innovation and Entrepreneurship Contest, held Dec. 2-6, 2019. The event was organized by the Israel Innovation Authority and the government of China, and held three ceremony sessions in Beijing, Changzhou and Shanghai.

The Israeli delegation consisted of 18 companies representing extraordinary technological innovation in three categories: Intelligent Technology (IT), Cleantech and Life Science. Each session included a pitch, Q&A and B2B meetings. Atlantium is honored to win second place in the Cleantech category in the semi-final competition in Beijing and second place among all companies in the final competition in Shanghai. According to Yariv Abramovich, CEO of Atlantium, the company’s recognition at the China-Israel Innovation and Entrepreneurship Contest has created a lot of interest in Atlantium and its innovative Hydro-Optic (HOD) UV technology; paving the way for new opportunities in Asia.

Atlantium also was invited to present the capabilities of its HOD UV solutions at a Chinese-Israeli high-tech park in the city of NanChang, China. The park is set up by Innovation BaseCamp and real estate company Vanke. NanChang City hosted a conference in honor of the Alibaba Group campus in the park which was attended by company representatives and government officials from Jiangxi Province. Atlantium’s Itai Bransky participated in the groundbreaking ceremony, the official contract signing of the event. “We are thrilled to have the unique opportunity to position Atlantium as a strong candidate for funding, strategic partnerships and other ventures,” Abramovich said. Atlantium was founded in 2003 and has over 70 team members and approximately 3,000 full-scale installations across the globe. To help support sales, marketing and business efforts in the Asia Pacific region, the company has an office in Shanghai and India and a network of distributors and agents.