Daniel Heiwig, a member of the army's officer class is pledging to stop any form of socialism from taking over our country. 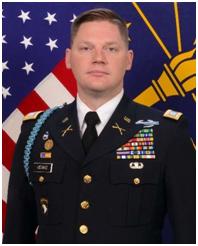 Daniel Heiwig is a committed and proud Hoosier patriot who continues to serve in the U.S. Army for more than 20 years as both Infantry Officer and Enlisted Soldier. He is a husband to Lori ‘Brackemyre’ Heiwig and father to Leah (12) and Hailey (9). Their youngest daughter Hailey is homeschooled by Lori.

After graduating from Seymour High school in 2001 Dan Heiwig enlisted in the U.S. Army. While completing college, Dan served in the Indiana Army National Guard and attended Vincennes University, IUPUC, Ivy Tech in Columbus as an enlisted soldier.

Dan Heiwig has an MBA from a Christian University in Oakland City, Indiana. In 2008 Dan Heiwig was accepted to Officer Candidate School at the Indiana Military Academy class 55-09. Dan chose Infantry for his military branch, became airborne qualified, and was trained by the greatest leadership organization at Ft. Benning.

Over the past 20 years, Major Heiwig has served with distinction in a diverse set of missions that required being specially selected and specially trained. All missions were for external and intrinsic operations that fought against direct threats to the United States. Dan has deployed on many missions and has been tested in the fires of combat receiving the Combat Infantry Badge from the famous “Band of Brothers Unit” 506th Infantry Regiment of the 4th Brigade Combat Team of the 101st Airborne Division while deployed to Ghazni, Afghanistan. Dan is an honored recipient of the coveted National Infantry Association Order of Saint Maurice Medal from the Chief of Infantry of the United States Army for demonstrating a significant contribution in support of the Infantry; and must represent the highest standards of integrity, moral character, professional competence, and dedication to duty.

After the Afghanistan withdrawal was announced, Dan transferred to Ft. Knox, KY with the Army Reserves Careers Group for operational research and analysis on projects to save the military from losing military professionals and increase retention of troops.

In his retirement, Dan and Lori plan to raise their two daughters in Seymour Indiana, and focus on helping the community and their church. Dan Heiwig will continue to serve his country by serving the Hoosiers of Southern Indiana and Reclaiming the American Heritage!