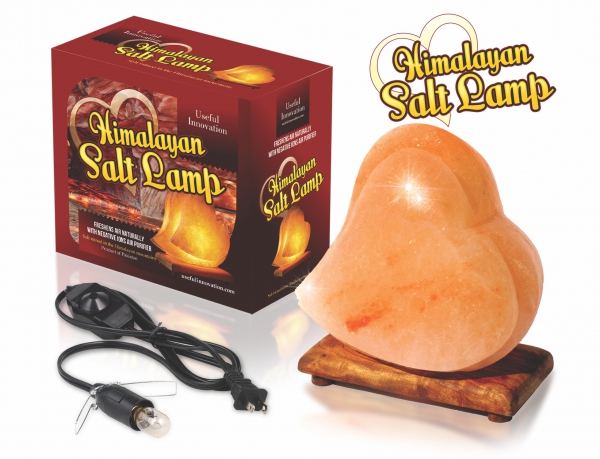 The meticulously sculptured heart shaped Himalayan salt lamp from Useful Innovation has once again become available on Amazon. Salt lamps are generally available in the marketplace as crudely formed, with machined geometric shapes, or hand crafted into artistic pieces. The heart shape Himalayan salt lamp from Useful Innovation is in the latter category. Choosing which style of salt lamp to buy depends on how, where, and why it is going to be displayed and used in the home or office. The choice will also be influenced by whether it is being purchased for personal use or as a memorable gift. Available on Amazon at https://www.amazon.com/Himalayan-Romantic-Natural-Crystal-Friendly/dp/B017QPJQ4W

The lamp is about 6x8x4 inches and weighs 6 to 7 pounds, and comes with a six foot UL approved cord and dimmer switch. Every piece of Himalayan rock salt is unique in color and color pattern, which is created by the minerals present and how they were deposited during rock salt formation. This and the hand crafting aspect make every piece one of a kind. Himalayan salt lamps are made of the natural materials of ancient rock salt mined in the Himalayan mountains and Neem wood crafted into a lamp base. Neem wood is famous due to the positive uses of Neem wood oil. Himalayan rock salt has been mined for thousands of years for consumption by humans and animals, and was created before the dawn of industrial pollution. More information available at http://www.usefulinnovation.com

During salt lamp use, the rock salt is heated by a 10 watt light bulb, which is commonly available on the market for replacement. Properly cared for, the salt lamp itself should last a lifetime. Negative ions are released into the air during operation. The amount released are dependent on the amount of heat released from the internal bulb, as determined by the adjustment of the supplied dimmer switch. A preponderance of negative ions in the air has been shown by experts to improve people’s general feeling of wellbeing and remove pollen, dust, and various pollutants from the air by causing them to stick together and fall out of the air. Himalayan salt lamps do not cause soiling of the walls and furniture in a room as is sometimes the case with powerful electronic negative ionizers. The dimmer switch gives the Himalayan rock salt lamp dual purpose capabilities as a medium power light source or a low light night light putting out a soft amber glow. This intense labor created salt lamp is available on Amazon at https://www.amazon.com/Himalayan-Romantic-Natural-Crystal-Friendly/dp/B017QPJQ4W