John is still running the original transmission at 1,334,000 miles with zero overhauls due to Amsoil synthetic transmission fluid! He said it still shifts as smoothly as the day it was brand new. 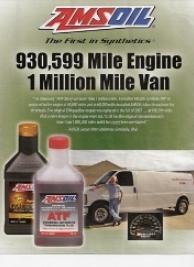 In September of 1999, John Schlimmer drove a new 1999 Chevy express cargo van off the car lot to start a delivery service. He signed on with an air freight company in Vandalia, Ohio, as an independent contractor to pick up their freight and deliver it nationwide to their customers.

The delivery service turned out to be an 8,000 – 10,000 miles a month adventure, delivering all over the USA. Fortunately, in April 2000, he was introduced to Amsoil synthetic oil, and they’re remarkable 25,000-mile oil change!

On May 8th, 2000, at 68,250 miles, he put the AMSOIL products to the test. He did a DIY engine oil change and oil filter. A week later, he had the dealership flush the transmission and add the Amsoil synthetic transmission fluid along with changing the differential oil.

October 2007 at 930,599 miles: Location: Jackson, MS, a valve keeper wore out in his 350 Chevy engine, causing one of the valves to stick. He replaced the motor and had the original engine sent to Amsoil. An independent lab tore it down and specked it out. Incredibly it only had less than 1% wear throughout the engine. The lab said the engine could have been put back in service. A bittersweet moment Schlimmer said!

John thought about dropping the original transmission at a million miles and putting in a new one because he didn’t want to have a breakdown while on a delivery. But with the transmission still operating smoothly, he decided to see how many more miles he could get out of it.

Fast forward to July 2018 at 1.3 million miles. After driving his 99 Chevy Van in the blistering heat of the Arizona desert for the past six years and 85,000 miles, he became concerned about the condition of the Amsoil synthetic transmission fluid breaking down.

He made an appointment at the local dealership to do a transmission flush and catch a sample of the Amsoil ATF when the tech dropped the transmission pan. He mailed the ATF sample to an independent lab in Indianapolis, IN. About a week later, he received the results by email. What a pleasant surprise, Schlimmer said.After six years of driving in the heat of the AZ desert, the Amsoil ATF had not broken down. You can see the details of the oil analysis on John’s website Million Mile Chevy

One of John’s favorite sayings, “whenever you run Amsoil synthetic oil throughout your vehicle or equipment, it will make it almost immortal!” Statistics at 1,000,000 miles: The transmission oil only needed to be changed 6 times (18 had he used regular ATF). The engine oil only required changing 50 times (192 had he used regular oil). Gas consumption was 68,461 gallons, at a cost of $125,486. Estimated savings by switching to Amsoil: $18,000

John said that after all these years of running Amsoil products throughout his vehicle, he’s experienced Increased MPG, More Horsepower due to less friction.The engine, transmission and differential run cooler. Easier cold start-ups due to the Amsoil fluids pouring at up to -50 below. Not only has John’s friends and relatives switched to Amsoil products, he has over 300 customers that are experiencing the same results.

John is still running the original transmission at 1,334,000 miles. Never been overhauled thanks to the Amsoil synthetic transmission fluid! He said it still shifts as smoothly as the day he drove it off the car lot.