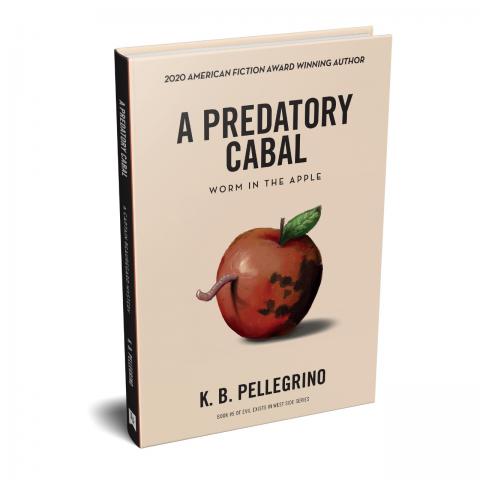 In August, K. B. Pellegrino won the 2020 American Fiction Awards in the Mystery/Suspense: Procedurals Category, for her second book, Mary Lou: Oh, What Did She Do?

A rather prolific writer, Pellegrino has published her first trilogy, as well as a fourth book, in less than 17 months. They’re all set in the Captain Beauregard Mystery series.

As with her previous four books, Pellegrino has based this crime story in West Side, MA, a fictitious western Massachusetts city, that closely resembles one she knows in the real world.

In A Predatory Cabal, Captain Rudy Beauregard’s detectives feel out of their element when five beautiful people are murdered in suburban West Side Massachusetts. The detectives discover the victims were participants in sexual forays; anathema to the broader elite community. As stated by all, “This is not NYC.”

But unlike previous crimes they faced, there doesn’t seem to be a common motive among all victims’ deaths.

As Pellegrino writes in the story’s overview, on what questions are rushing through Captain Beauregard’s mind: “Why, just why, did they have to die? He wondered if sex was not the motive. Perhaps he could fall back on greed, power, and envy; favorite motives for murder. Who is the sociopath/psychopath behind the killings? These were not random or accidents. These murders were planned.”

The title A Predatory Cabal: Worm in the Apple, hints to the shiny appearances of the elite, of people united in some close design, which in reality hides their rotten core.

To find out more about the Author and her books, you can visit https://kbpellegrino.com.

To get a taste of the new book, a free chapter is available for download at https://kbpellegrino.com/a-predatory-cabal/FreeChapter.

A Predatory Cabal: Worm in the Apple will officially launch Tuesday September 29, 2020. It is already available for pre-order in Paperback, Hardcover as well as in eBook / Kindle formats on major online book outlets such as Amazon, Barnes & Noble, iBooks, Nook and bookstores will be able to carry inventory through IngramSpark.