Life Wellness Healthcare has launched AirPhysio a portable handheld mucus treatment device that uses oscillatory pulses and pressure to loosen mucus from the airways and relieve the symptoms of Cystic Fibrosis (CF) and other respiratory conditions. 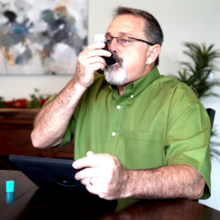 More details can be found at https://www.youtube.com/watch?v=3VlJth7weMA&t=67s

With the launch of AirPhysio, Life Wellness Healthcare brings its award-winning device from Australia to customers across Canada and the United States. The premium Oscillating Positive Expiratory Pressure (OPEP) device is manufactured in Australia and has been featured on television and YouTube.

According to Cystic Fibrosis Foundation, more than 30,000 children and adults in the United States suffer from CF. People with the condition suffer from the excessive secretion of thick and sticky layers of mucus that prevent efficient mobilization. This mucus traps bacteria inside the lungs and prevents regular airflow, causing recurring chest infections, shortness of breath, and chest pain.

The treatment regimen for cystic fibrosis could include surgery, oxygen therapy, or other types of physiotherapies. However, according to recent research, OPEP devices are more effective at treating cystic fibrosis than conventional physiotherapy techniques.

Because AirPhysio is an OPEP device that is quick and easy to use, it helps cystic fibrosis patients clear their mucus without the need for surgical procedures. Additionally, it does not cause any allergic reactions or have any side effects. A modified version, the AirPhysio Low Lung, is prescribed for children and elderly people, as it requires less effort to operate. The device also helps patients with cystic fibrosis widen their airways and reduce fluid collection in the lungs.

The regular usage of AirPhysio helps strengthen the lungs and expands their capacity. It’s often recommended by healthcare professionals as a preventative measure for people with weak lungs, or patients after surgery. The device also benefits those whose vocation relies on optimum lung function including athletes, singers, wind instrument musicians, swimmers, and deep-sea divers.

A satisfied customer states: “AirPhysio is a very simple, yet effective device. It has helped me cough up the mucus clogging my air passages, making my lungs clearer and healthier. I’ve suffered from lung complications for years, but after using the device for a couple of days, I started feeling a huge difference.”