A new report has been launched by BTMshop, detailing the benefits of the Blockchain F-12 GPU Mining Rig. It highlights the specs and how it can benefit customers looking to streamline their mining operation. 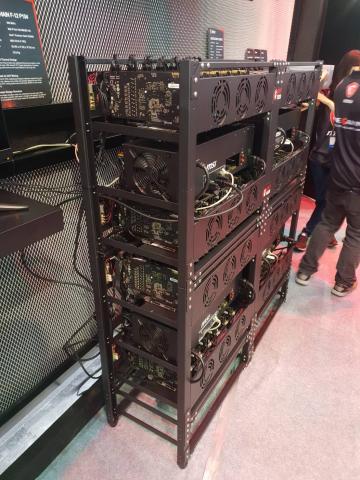 BTMshop has launched a new report on the Blockchain F-12 GPU mining rig. With Computex 2018 in Taipei all wrapped up, it is able to discuss full details on one of the most anticipated and exciting cryptomining hardware product launches to date.

More information can be found at: http://btmshop.ca

The report explains that as a first single sku complete GPU mining rig from a major hardware vendor, the Blockchain F-12 ushers the beginning of complete mining solution offerings.

One of the benefits of the vendor rig is that it does away with the hassle of assembly. What’s more, it means customers don’t have to source any expensive, top of the line components. For anyone interested in mining cryptocurrency, it represents a streamlined entry point.

Directly on the heels of MSi’s new custom designed for mining motherboards that most impressed from testing units, the Blockchain F-12 is based upon the smaller of two, the H310-F Pro.

The report states: “If you’re interested in a top performing AMD rig that compares to NVIDIA’s rockstar P104 in hashrate for cost, the barebone chassis with these MSi’s RX Vega56 OC is the way to go, they are an absolute mining fav if you have the budget.”

MSi’s Blockchain F-12 is only being made available to an exclusive selection of value-add resellers/blockchain technology integrators for North America, as it’s not offered through traditional distribution/retail channels.

One, however, comes highly recommended by BTMshop and is in the midst of launching their new online retail operations based out of Western Canada servicing the entire Canadian market. They are offering first access at optimal pricing with first arrivals expected as soon as late June.