A New Generation Of Woodstock Takes The Stage in Bethel, NY 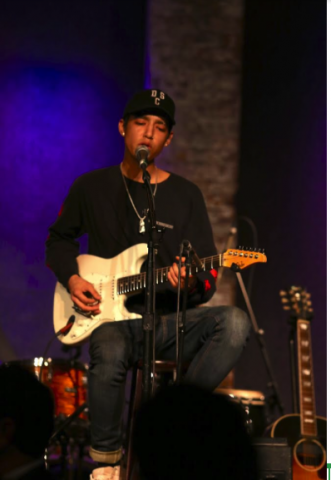 BETHEL, NY – The Woodstock Music & Art Fair marks its Golden Anniversary on August 15th-18th, 2019 as a new generation of Woodstock lineage holders prepares to soundtrack the next fifty years. Guitarist, singer/songwriter Chogyi Lama, will play a set before Santana and Doobie Brothers, as part of the recently announced Pre-Show Festivities at Bethel Woods Center’s Anniversary Weekend celebrations. “We are delighted to have Chogyi join us on Saturday, August 17th, to help commemorate and celebrate the 50th-anniversary of the Woodstock Festival, and it will indeed be very special. Chogyi will play on the very spot where Richie Havens, his grandfather, performed during our 40th anniversary celebrations.” said Darlene Fedun—Bethel Woods Center Chief Operating Officer, “It not only is a magnificent nod to his family heritage but is an inspiration to future generations of musicians.” His first visit, to Bethel Woods this year, was a stripped-down performance at an event to kick off the museum season back in March. “Darlene and everyone at Bethel Woods have been great, I am honored to be invited back, this time with a full band—we’ll play some of my original songs and some covers.”

As the grandson of legendary, inaugural Woodstock performer, Richie Havens, some might have expected Chogyi to join the Woodstock50 din, but he’s been quiet about the anniversary and his own contributions to festivities. “Sometimes self-promotion feels like spamming on social media, so I don’t do much of it. And then the conversation about Woodstock was all over the place, so I stayed out of it. I was waiting to announce the invitation to play Woodstock50, as well as Bethel and others, but things got crazy for Michael.” said Chogyi, “In the end, the music is the thread and I’m looking forward to playing on that weekend.” His grandfather passed away just before Chogyi’s first performance with Paul Green Rock Academy, in 2013—now a singer, songwriter, and guitar player, it’s rare to hear him play Havens. When asked about carrying his grandfather’s legacy forward, “I wouldn’t say it’s difficult but it is a heavy weight. He was my Grandpa and a legend before my time as a musician.” continuing, “The hardest thing about it is when people discredit the years of hard work I’ve put in, by saying ‘Oh, so that’s where you get it all from’. It is in my blood, but it’s tough when people move differently around me because of it.”

Chogyi’s first self-produced independent release, Karma, feels like a Neo-Soul classic. Live, his guitar playing often speaks to the Hendrix lovers in us all. A diverse ability and willingness to musically shape-shift has brought him to perform and record with punk legends, Bad Brains (most recently playing guitar on Hip Hop artist Denzel Curry’s cover of I against I) or tour (at 18 years old) with Aaron Freeman (Gene Ween). “I try to adapt to the musical situation as best as I can. Anybody can play fast but fitting into a sonic landscape is the challenge.” His time with 420 Funk Mob is its own wild ride, true to PFunk form—there are sometimes five guitar players on stage. Chogyi continues, “I guess the versatility aspect is just a product of playing and listening to all styles of music and being open to stepping out of my comfort zone. I’ve always been open to different “genres”, that’s where it all starts.” Keep an eye out for what he’s got coming out of the studio, “I can’t say too much about it but if all goes as planned I should be dropping a few things (1 solo and 2 collaborative projects) before the end of the year. And some more planned for next year, too.” He’s busy and he likes it—because busy means playing music.

August 17th If he can make it back to Woodstock in time, he will join Simi Stone for a set at the Colony Cafe.

As well as the shows on the Pavillion Stage and the Museum, Bethel Woods will offer a variety of special programming for those attending Anniversary Weekend events. Concert ticket holders can access the upper campus Friday, August 16 – Sunday, August 18 for live music, food & craft vendors, adult-art making, and games.