Sunland Tax today released a report titled "8 Secrets The IRS Doesn’t Want You To Know" on minimizing personal and business risks in an IRS investigation. The report is available at no cost at https://taxres1.com/8Secrets. 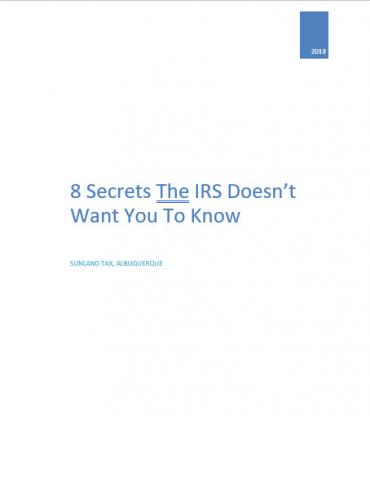 Sunland Tax has today released a free report titled: “8 Secrets The IRS Doesn’t Want You To Know.” The main aim of the report is to demonstrate how IRS-accused taxpayers can minimize their exposure to penalties and other legal and financial risks while also providing concrete advice on how taxpayers can best respond to IRS collection and enforcement tactics.

The report has been made available at no cost by Sunland Tax to the general public, thought leaders in the federal and state tax representation and resolution market and anyone with an interest in how to minimize the downside of an IRS investigation.

The report was written with a specific focus on IRS-accused Albuquerque-area taxpayers, according to Bill Sommers of Sunland Tax, author of the report. “We wrote this report in order to provide useful immediate guidance to people while they are facing an IRS tax crisis, and to give them encouragement that expert, proven strategies are available that can minimize the negative impact of their encounter with the IRS.”

When asked about why they released the report at this time, Sommers, a co-owner at Sunland Tax said: “We have seen the damaging consequences when an IRS-accused taxpayer either does not defend himself or herself knowledgeably, or when a taxpayer falls for an 800-number con artist’s false promise to make the IRS go away. We wrote this report so people who are under an IRS threat know they can take some basic defensive steps themselves and then make informed decisions about selecting outside expertise when needed.”

Sunland Tax was founded in 1982 and is considered a leading Albuquerque-area tax and accounting consultant with a successful track record in representing taxpayers in IRS disputes, investigations and audits. It is best known as a top Albuquerque-area expert in significantly reducing or eliminating IRS-proposed penalties and seizures, and enabling clients to regain control of their finances while reducing their stress and fear levels.

Its unique position in the industry gives the firm the authority to produce such a report on strategies and tactics to minimize the downside of an IRS investigation because its experience has demonstrated that IRS problems do not go away on their own, and the firm’s proven tactics are able to save IRS-accused taxpayers significant amounts of money, time and stress while restoring their business and personal lives to pre-IRS health.

For example, the report provides valuable information that will ultimately benefit the reader by informing them of specific ways to combat IRS tax accusations and minimize the potentially costly consequences. This insight simply wouldn’t be possible, or their advice nearly as effective, without the 36 years spent in the IRS or state tax representation and resolution world.

More information on Sunland Tax can be found at http://www.sunlandtax.com/debtrelief.php

The report, “8 Secrets The IRS Doesn’t Want You To Know,” can be downloaded by going to https://taxres1.com/8Secrets.