Screen Solutions has released 3 previously unpublished facts about its Video on Glass Technologies "Rear Projection Film". Further information can be found at www.rearprojectionfilms.com. 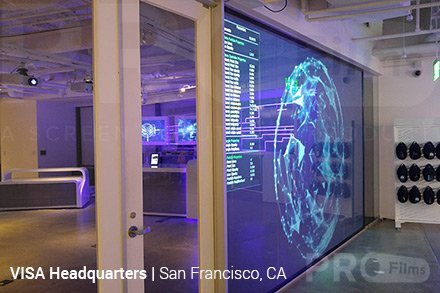 Screen Solutions has today made public 3 as yet unreleased facts about its Video on Glass Technologies ‘Rear Projection Film’, now available all of the SSI rear projection films are available on the company website at www.rearprojectionfilms.com and avaialble purchase over the phone during business hours, which fans and consumers within the storefront advertising space should find particularly interesting.

The 3 items include nuggets such as how:

The idea for creating Rear Projection Film came about after SSI had been producing and offering a range of rigid rear projection acrylic screens and although the client could hang them in the storefront window it was challenging and not directly applied to the glass. SSI knew that the technology had to be condensed down to a film that would apply to glass. …

Rear Projection Film had been in development for 16 months, originally the films produced had bad hotspot issues no adhesive requiring tape or some other method to affix them to glass. Over the next year SSI had developed a way to to increase quality and add an adhesive layer to allow for the rear projection film to be applied directly to the glass and had a team of 12 working on it. This goes to show over the years SSI’s continued dedication to the industry and products has allowed for the creation of new and better performing products as well as wider rolls and even clear rear projection films.

Video on Glass almost didn’t see the light of day, when many times clients come to SSI after having been ripped off online by some supposed professional with a website. Screen Solutions with more then a decade of experience developing, selling and installing rear projection film will always be there when support is needed. Offering only the finest films which are backed by a leading 2 year warranty and decade plus of experience. Don’t wonder if rear projection film will work or be good quality, SSI is here to support each and every client. The problem was overcome by always keeping a healthy supply of rear projection films in stock and available for quick shipping and being there to answer the call when customers have rear projection film application or installation questions.

Screen Solutions did something different compared to other businesses in the storefront advertising space; by the difference is clearer then ever, SSI is the oldest and most knowledgeable supplier and installer of quality rear projection film products.

Screen Solutions International is quoted saying: “At SSI the desire is to do things to connect with the consumer and wholesale and international customers that other firms simply cannot provide. Providing services like Site Visits, Packaged Solutions, Installation, Support, Phone Support and Email Support, and releasing these little factoids even after Rear Projection Film hits the market are what make all the difference.”

Rear Projection Film has been available and impacting small business and corporate retail around the world for more for then 12 years. To find out more, it’s possible to visit www.rearprojectionfilms.com

For more facts and further information about Screen Solutions, this can be discovered at https://www.rearprojectionfilms.com/blog/