The presence of the 1967 Ford Fairlane 500XL 427 R Code, (the Fairlane name is surmised from Henry Ford's estate, Fair Lane, near Dearborn, MI) can be relished again with a Premium Fit Mens T 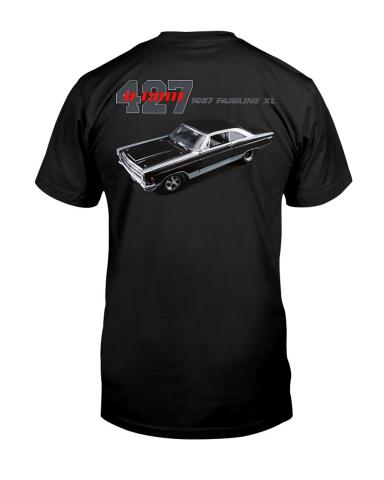 There were the funny cars and the Hemis, but here is one that was built to win NASCAR events and send fear up the spine of the competition on drag strips in the 1960s. The presence of the 1967 Ford Fairlane 500XL 427 R Code, (the Fairlane name comes from or is surmised from Henry Ford’s estate, Fair Lane, near Dearborn, Michigan) is also referred to as the Ground Pounder, nicknamed in the 1960’s, can be relished again with the new Premium Fit Mens Tee launched by Quarter Mile Addiction.

The 427 R-Code Ground Pounder came with a big block 427 side oiler and was built with four speed manual gear boxes. In the early days, its 335 HP did not match up to the Chevy, Pontiac or Mopar monsters, with the Mopar Hemi going up to 425 HP. The installation of 427 HP engine into the Fairlane, in a limited number, in 1966-67 took it on par with the competition. The car was subsequently released for mainstream sales.

The 1967 Ford Fairlane 500XL 427 R Code was born for competition, but raced only in 1967. That was also the year in which Richard Petty took his Hemi Belvedere and toppled all competition, but the Fairlane turned out to be the one to offer some resistance.

Quarter Mile Addiction has launched the Premium Fit Men’s Tee with the slogan, ‘427 R Code 1967 Fairline XL’. The t-shirts are available in small to 3XL sizes for men and women, and come with a color changing mug. The product can be bought from the official Quarter Mile Addiction website. See the link here https://www.quarter-mile-addiction.com/ford-fairlane-427-r-code

All T-shirts at Quarter Mile Addiction are available in various sizes along with a special coffee mug featuring the same logo and slogan. Deliveries take 5-10 business days, with a rush 3-day service available for anyone dying to get their hands on the product. All merchandise is proudly printed in the United States.