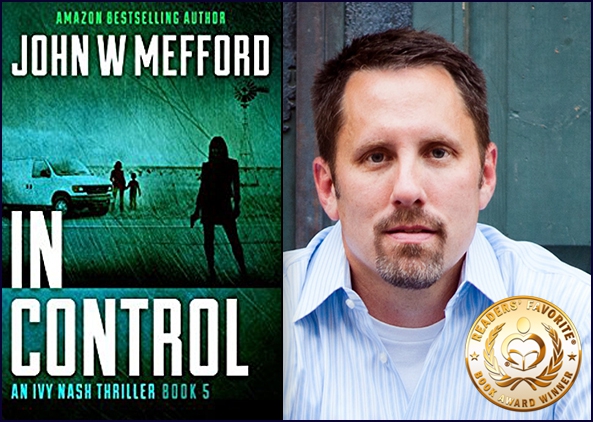 For over 12 weeks, Mefford’s 30,000 followers have been eagerly awaiting the release of ‘IN Control’, the 5th book in Mefford’s highly-acclaimed, suspenseful Ivy Nash thriller series. Mefford’s latest detective thriller focuses on the themes of kidnapping, drug trafficking, and crime. Mefford’s protagonist, Ivy Nash, has been praised as “realistic”, “irresistible”, “three-dimensional”, and “memorable” by both readers and critics. Cathy Weebler, a critic at 5 Star Books, described Ivy Nash as “a strong, realistic protagonist worthy of many more books.”

“Mefford is a terrific writer”, writes the critic Cathy Weebler in her editorial review of ‘IN DOUBT’, the 3rd book in the Ivy Nash series. She described Mefford’s book as “a fast-paced, action-packed thriller with a well-structured, intriguing plot full of twists and surprises.” Readers have described his books as “gripped from the beginning”, “action-packed”, “well-crafted” and “intriguing”.

The highly-acclaimed author has been featured and praised by numerous publications and book clubs, amongst them Ellen’s Book Club which listed ‘IN Control’ as the #1 Most Anticipated Thriller this Autumn.

During an interview with Fresh Voices Magazine, Mefford shared with readers what inspired him to write ‘IN Control’. “The character of Ivy Nash was inspired by what I’ve witnessed here in the state of Texas around the mistreatment of kids who are raised as part of “the system,” Child Protective Services.”, Mefford told the magazine, “Ivy was raised in “the system,” having spent time in seventeen foster homes. Given her traumatic childhood, she sought to reverse the trend by getting her college degree and becoming a special agent for CPS. Soon, she opened her own firm, ECHO, which allowed her greater flexibility to help troubled kids.” When asked during another interview with the NY Literary Magazine how many more books he plans to publish in this series, Mefford replied, “Starting with ‘IN The End’ (Nov. 10 release), I’ll be launching a new book every 2-4 weeks.”

About ‘IN Control’: A child is kidnapped, sending the mother into a panicked frenzy. It’s one of a dozen such crimes across central Texas, targeting those who live behind the pristine brick walls of master planned communities.

Ivy Nash hunts the kidnappers, but she quickly sees this case morph into something else entirely different…more dangerous, more twisted than anyone could imagine. At the same time, the father of Ivy’s long-time friend pleads with her to do what no friend would ever want. What she learns could shatter their worlds. An international drug trafficking ring. A professional hit. And one cover-up after another. Secrets from the past are exposed, but how can Ivy separate reality from a smokescreen of falsehoods? With lives on the line, she can’t fail. The clock is ticking… Learn more about ‘IN Control’ here: https://www.amazon.com/Control-Nash-Thriller-Book-… About John W. Mefford: John W. Mefford is an Amazon #1 Bestselling Author, #2 Bestselling Author on Barnes and Noble, a Readers’ Favorite Gold Medal winner, and a member of the International Thriller Writers. He has been interviewed by Fresh Voices Magazine and The NY Literary Magazine. Mefford’s work has been featured and praised by Ellen’s Book Club, 5 Star Books, and WordsWell Literary Magazine. Learn more about John W. Mefford here: http://www.johnwmefford.com/